Here's a few more bits I got started on during the Christmas break.

First is a foamcore building which is loosely based on the garage in Jadotville (as in the film Siege of Jadotville). If you haven't already seen it then I would recommend it. 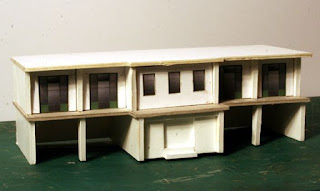 There is still quite a bit to do  but as I'm back at work now it might take a while to finish.
I'm also trying to make a small village of 5 or 6 huts.
I made the first one a few months ago now but managed to get a few more bits done. Again, these need finishing. The main body of the hut is made from 40mm polypipe covered with modelling clay while the roof is just a cone of paper covered covered in clay then scribed to give it a thatched look. 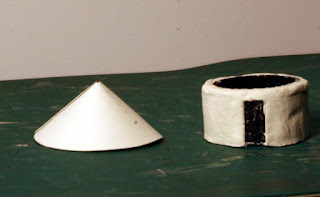 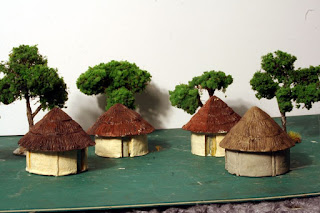 One thing I will need plenty of is trees and I want to make these as cheaply as possible so I've made these using twisted wire covered with hot glue. The foliage is horse hair covered with ground up foam painted green. The foam is old sponges put through an old blender with a drop of acrylic paint chucked in. 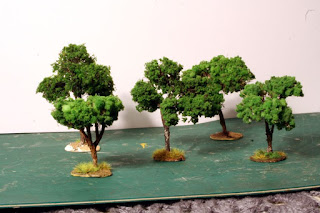 Lastly here's a picture of  some Panhard armoured cars, 2x 90mm and 1x 60mm. These are from Peter Pig and I have had them for a while but have cleaned them up a bit and will repaint them soon.
I want to add a Ferret to these sometime soon which will probably come from QRF. 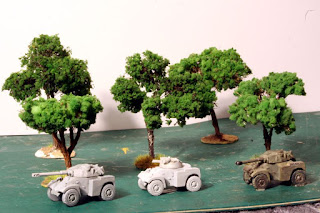 Over the last week I've been painting a few figures in the evenings while at work so hopefully will have some photos of those soon. Its a short weekend for me this week as I have to leave again tomorrow so have no time to do any modelling, but hopefully next week I can start finishing some of this stuff off.
Posted by grahamrfd at 19:58 No comments:

I've just had a week off work and have taken the opportunity to get a bit more modelling done. I few weeks ago I ordered some bits from Peter Pig and QRF for my african collection.
I've been basing figures on 12mm washers and have done around 100 so now need to start painting.
Here's a couple of photos of some painting trials I did this week.
First is some Peter Pig naked militia 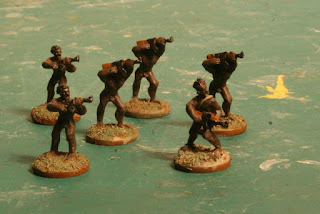 Next are the first of my regulars (the good  guys) 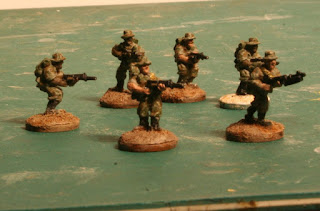 I've been looking for 15mm helicopters to go with my Mi-4s and decided to go with QRF. After reading some negative comments on them I was a bit worried about buying these but will reserve judgement until I've finished them. They will need a little filling and sanding but theres nothing wrong that can't be sorted with a bit of  time. 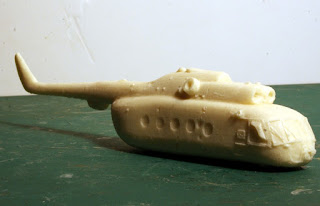 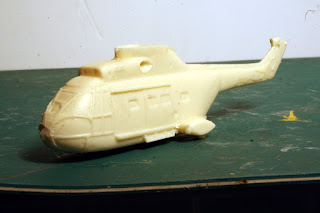 Puma
These come with whitemetal castings for the rotor blades and landing gear where supplied. The Puma has cast wheels in the retracted position which I think is a bit of a mistake as in wargaming the |Puma will most likely be used as an assault helicopter where it would have it's wheels down. I think I will make my own landing gear for these.
Next up is Peter Pigs Centurian Shot from their IDF range (AK47) 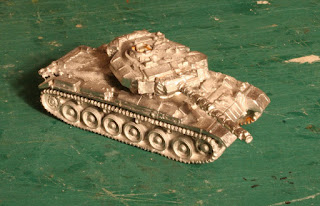 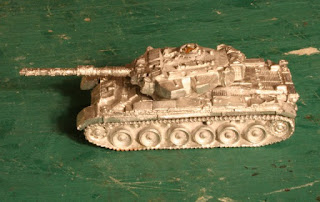 Its a nice model but I found it difficult to fasten together, I prefer to solder white metal, and there isn't much contact between the track castings and the body to enable it to be soldered so I will run a fillet of epoxy under these to strengthen them.
Next is a Peter pig BTR 152.
This is a nice model and went together well. It consists of a body casting, a rear panel and 6 wheels 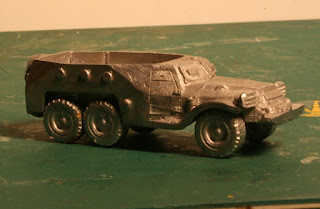 Finally I've got a couple of QRF models, a BRDM2 and a VAB 4x4.  The BRDM is an easy model to assemble consisting of 4 wheels, a turret, a body and a gun barrel.
I'm struggling with the VAB as I don't know how the gunners hatch goes, Ive not been able to find any photos of this variant on the net anywhere. 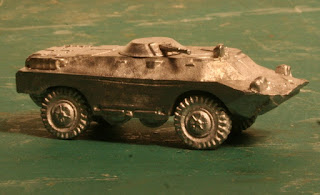 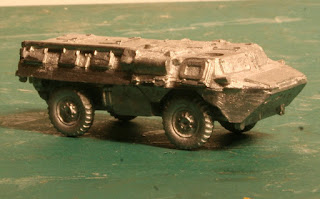 Posted by grahamrfd at 17:56 No comments:

I made one of the Zvezda Urals up over the last week. Its a lovely little model which went together very well with no glue, its pushfit assembly, however I will glue this one together to make sure it stays that way. The detail is the best I've seen on one of their kits so I'm hoping they do more post ww2 stuff like Bmp 1s, M113s etc
Here's a few pictures, I'll start with the box artwork. 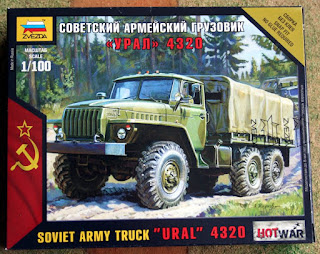 The kit consists of 2 sprues 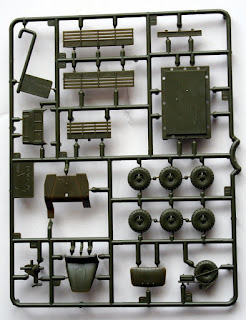 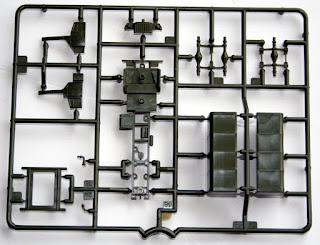 A few pics of the assembled truck 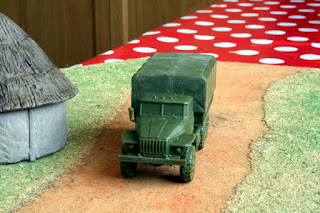 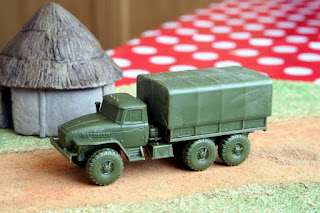 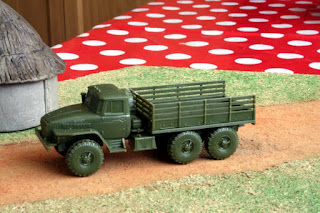 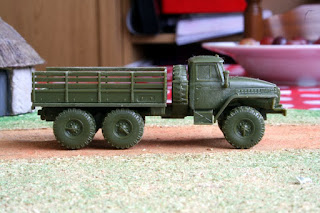 The canopy can be fitted or removed as it isn't really necessary to glue it in place.
Hopefully this week I'll get a second one made then put them in the queue for painting eventually. I'll gradually work my way through the boxes of stuff waiting for the paintbrush.
Posted by grahamrfd at 19:16 No comments:

Not done alot this week but did manage to get the first helicopter painted. Just need to make another 2 or 3 (a couple of transports and a support version).  I ended up with a few of these as I had to buy them to get the other aircraft I wanted, the An-24s, Yak 40s and L410s. 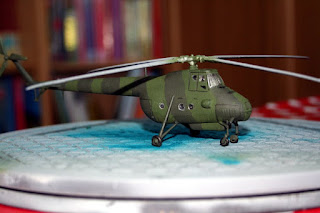 It still needs a bit of finishing but I'm quite pleased with the way its turned out.
I have also received a couple of Zvezda Ural trucks which look very good. I will get one made up during the coming week.
Posted by grahamrfd at 22:04 No comments:

Ive done a little more work on the control tower, changed the upstairs windows, added a handrail and painted the roof. I will finish it by painting the walls an off white. 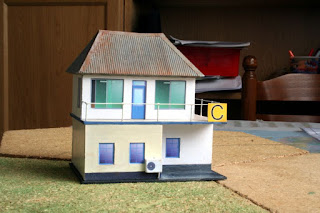 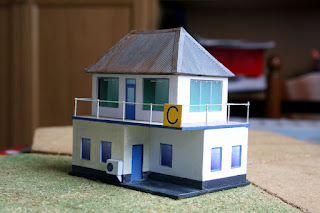 During the week at work I had time to draw the rest of the airport building walls so printed those off yesterday and added them last night. Just need to make the roof using a card former covered with slaters corrugated. 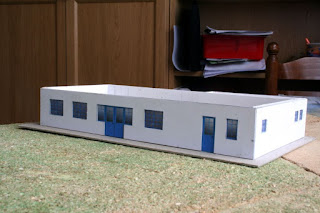 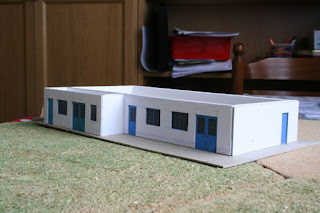 I'm working on a couple of plastic aircraft kits, an AN-24 and a L410 Turbolet. These are 1/100 scale and will hopefully look nice sitting in the airport.

Lastly Ive done a little more to the bar building. hopefully I will get these finished this coming week. 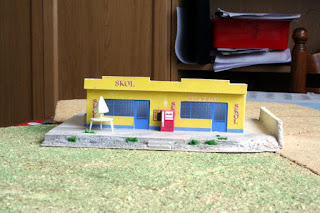 Posted by grahamrfd at 19:00 No comments:

Just a couple of photos of some Peter Pig items and a small check point I'm halfway through making. Ignore the paint as it won't stay this colour.

Posted by grahamrfd at 18:01 No comments: 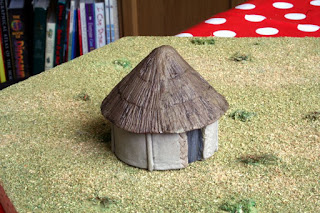 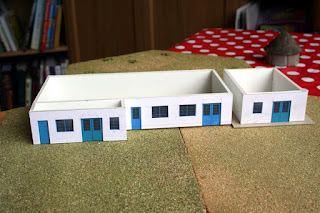 I shall make a couple more huts later then make a mold of the best one and cast them in resin hopefully along with some oil drums and shipping containers. All I need is the time.
Posted by grahamrfd at 17:28 No comments: